Learn About The TRAVELER PALM Tree 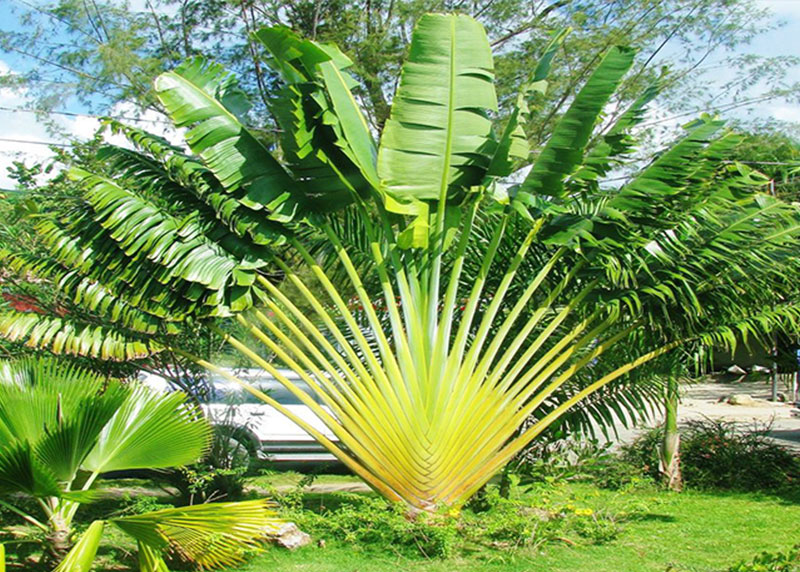 The fan-like Traveler’s Palm, is not a palm tree at all. Native to Madagascar, this plant is a close relative of the banana plant and belongs to the same family as the Bird of Paradise. Its name comes from the leaf base formation, a cupped shape that holds water that thirsty travelers could drink. Traveler’s Palm does best in tropical climates, but tends to rapidly outgrow its space, so regular pruning is necessary to keep it in check. In addition, Traveler’s Palms that have sustained frost or freeze damage should be pruned to promote recovery.

Description of Palm Tree
Sharpen pruning shears, loppers, saw or spade. If your cutting tools are dull, they will chew and shred your Traveler’s Palm instead of cutting it cleanly. Prune spent flower stalks at the base near the fan structure. Don't cut into the fan itself. Remove brown, tattered or damaged outer leaves near the central fan structure.

Trim off the outer two or three leaves on each side of the fan to shape the Traveler’s Palm and keep it from spreading outside the area where you want it. Never cut into the central fan structure.
Planting Instructions
Slice into the ground with a sharp spade between the Traveler’s Palm and any smaller shoots, called suckers, that appear from the ground near the trunk of the main plant. Push the spade handle toward the ground away from the sucker to dig it up, and pull the sucker out of the ground. Remove all suckers as soon as they appear to keep a clump from forming.

Repeat the trimming and pruning procedure regularly to keep your Traveler’s Palm healthy and contained within a small area. If you let it become overgrown, it is much harder to cut back than to prune regularly.

Wait until all danger of further frost or freezing is past before pruning dead or damaged foliage from a cold snap. When some new growth has appeared, prune dead outer leaves of the fan with sharp pruning shears or loppers.